This post is probably going to be ridiculously shallow.  I dunno. I’m having issues determining really anything about myself right now.

Let me start at the beginning.

My friend’s birthday was on Saturday and I went to Columbus to celebrate it.

That morning- well, afternoon, as I slept in. It was lovely. Anyway, that afternoon, I took a shower and spent way too long staring at myself in the mirror both before and after. Like a perv. 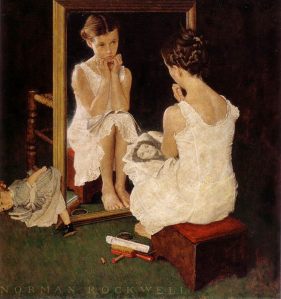 Norman Rockwell’s “Girl at Mirror”. Fits my emotions pretty well at the moment.

Mostly hating myself though.

The only casual clean shirt I had that wasn’t too hot for yesterday was a green halter top. I bought it because it shows off my fox tattoo nicely and I used to have this sort of love affair with my shoulders.

But not anymore. I put it on after my shower and stared at myself in the mirror. I frowned. Then I put on my capri jeans and stared at myself again. Then I realized what time it was and that I was running late and definitely didn’t have any time to wash some other shirt to wear.

I went with the green halter.

SD was the first to insist I looked fine.  Then my mother, as I borrowed her kitchen to make the deviled eggs for the party.  Then Texas showed up (we were driving up together) and insisted I looked fine.  But when I went into the bathroom before we got on the road to Columbus, I again stared in the mirror from various angles, and doing various things with my hair in order to try and see what they were seeing.

But I simply can’t.

The party was decently enjoyable. It consisted of a gaggle of girls, and one poor guy who had to listen to us talk about sex and compare experiences, as women do when there aren’t really any men around.  Hopefully he learned some stuff.  He home brews beer and spent a good amount of time talking to me about it and getting me to try various ales and ciders he’s made.

Army also does the home-brewing thing, so I’m used to it and thought some booze would be awesome anyway. I care so much less about my self-image when tipsy or sloshed.

I only managed barely tipsy as some of the other alters were being pretty firm on not going overboard due to the Daria crap we’ve been dealing with.

“Why are you feeling yourself up?” She asked, a bit more bluntly than Texas normally is. Suddenly all eyes are on me. I blush.

“Oh. Sorry. I feel a bit bloated and chunky at the moment. Carry on. What’s the adjective again?”

“What the fuck is wrong with you? You look fine.” She said. I shrugged and nodded at her.

“What is with women??” Brewer Dude said, staring down at me, “You all never seem to have any idea that you look amazing and worry about some little bit of curve you have. Most men do not want to touch or fuck twelve year old boys. It’s good you don’t look like one.”

Again, I nod and attempt a good-natured laugh. The rest of the evening goes well enough.  I end up going and spending the night at Texas’s, and again go into the bathroom to glare at myself in front of the mirror for way too much time.

I do distantly recognize the behavior.  Though it’s been years since my concept of my self-image has been so rageful and disdainful, I know the spiral of depression and eating disorders that follow.  And I can feel Victoria eagerly waiting in the wings, desperate to take control of our diet again.

I wish I could see what others tell me they do.  But when ever I stand in front of the mirror, or lie in bed and stroke my hands over my sides, stomach, hips, thighs, all I see and feel is flab, flab, flab.

And I hate it.

And I hate myself.

And I don’t want to be around anyone at all.